The site
Our old glasshouse was in need of dismantling, as it was over 20 years old and missing a few panes of glass.
The site was south facing and level, a great start for any site. I had a tap outside the door which would also be very useful in the near future. 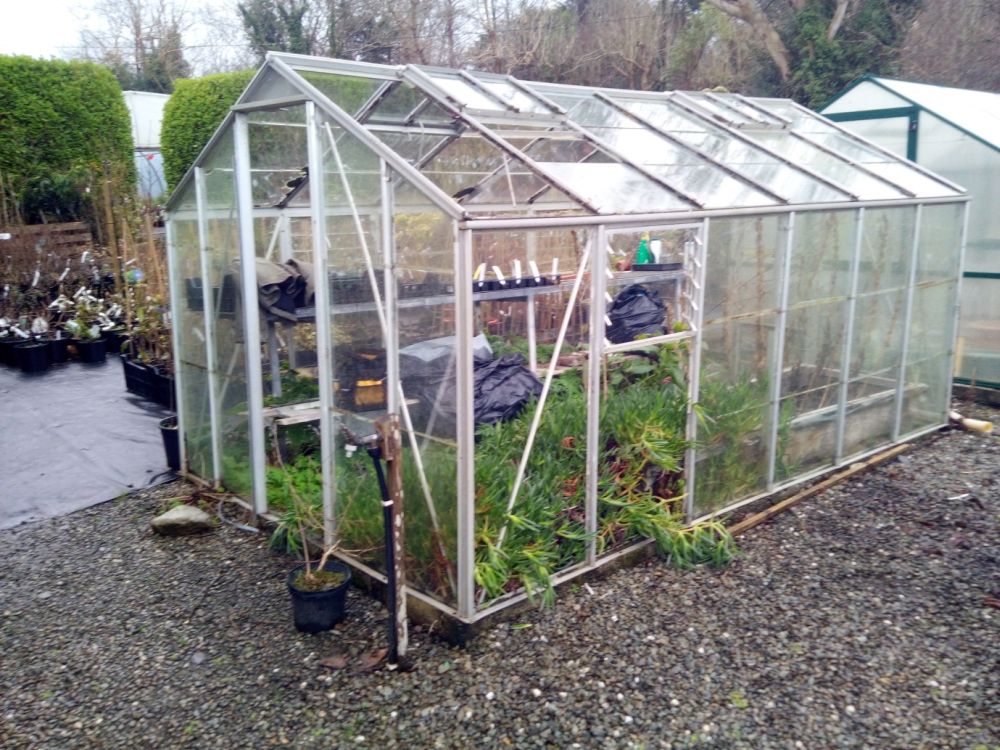 Preparing for base
After carefully dismantling the old glasshouse and taking the metal and glass to the recycling centre, the site was now ready for installing the base. I inspected the blocks used in the base of the old glasshouse and found they were in good condition, so decided to use some of them for the new base. Working from the back left corner, I installed wooden 4’ x 2’ boards, 6” longer on the inside measurement than the finished dimensions of the ordered greenhouse (3M x 3M). The corners were screwed together at this stage with 6” removable screws. I made sure to keep the wooden frame level at all times, and found using some builders sand on the base very useful to raise the boards where needed. To get the frame square, I measured the frame from diagonal corners and adjusted until each measurement was the same. Once I was happy the frame was level and square, I hammered 2, 3’ lengths of metal bar along the outside of each board to stop it bulging once the concrete was putting pressure on the inside of the wooden boards. I put hazard tape and old pipe on the ends of the metal so they would be safer to work around as I spread the concrete.

The next step was to mix the concrete that would be used to prepare the final base that the greenhouse would be attached to. I used a standard foundation mix of 1 part cement to 6 parts sand and grit. I found mixing small batches in my wheelbarrow keeping it dry until the contents were mixed together, and then adding small amounts of water, keeping it on the dry side and not too wet the best method. Using a hand trowel, I placed the concrete on the inside of the wooden boards and used the tops of the wooden boards as a guide for making the top of the strip level. I made the strip foundation around 8” wide, so with the extra 3” on the outside measurement , 1” for the greenhouse base, there would be around 4” of base on the inside of the greenhouse. At this stage, the builders sand on the inside of the site was very useful as a temporary retaining wall to stop the wet concrete from spilling inside the strip, and been wasted. I planned to use raised beds inside the greenhouse and wanted the roots to be able to reach the open ground under the greenhouse. Another option would have been to prepare a solid concrete pad at this stage, as you would if planning a shed. After 4 days drying time, I removed the wooden boards and metal bars, leaving a fresh strip foundation. I was now ready for delivery!

Installing the greenhouse
I had ordered the 3M x 3M greenhouse from Steeltech sheds 6 weeks earlier. They told me there would be a 6-8 weeks waiting time after placing the order and true to their word on the 12th of February, a very friendly crew of 3 arrived with pre constructed greenhouse panels on the back of their small truck. Watching them work was a pleasure, as they obviously had done this hundreds of times before. After screwing the four wall panels to the base, there was hardly time to take a picture and they were on to the two roof panels!

Once the roof had been attached, a metal ridge capping was installed using a generous amount of strong screws. They told me that these green houses were built to withstand the Irish weather and indeed there are a few Steeltech greenhouses braving the winds on the Arran islands! If in doubt, check out the owner of Steeltech sheds, Sean Brett demonstrating this with a hilarious take on the failed Tesla cyber truck demonstration last year, with his own, Sledge Hammer Proof Polycarbonate Greenhouse! https://www.youtube.com/watch?v=9zoc9EfhgUQ

In less than an hour, the final few finishing touches were been added including a clever window that would prove a great addition for air circulation as the temperatures increased in the coming months.

Preparing the raised beds
The next step was to prepare the raised beds. I decided to use untreated wooden boards, 8” x 4”, as these beds were for growing food in, and I was concerned about possible leaching of unwanted chemicals from treated sleepers into the soil that would be growing the vegetables. My local saw mill selected some excellent Lawson cypress trunks, as these have super long rot resistance if in contact with the ground. Once I decided on the size and shape of the raised beds, I cut the timbers to size and used the lip of concrete on the inside as a level guide, to bolt the 8 timbers together. I then filled the middle area with large stones, as this would be the path, and needed to be raised.

Filling the raised beds
Deciding what to fill the beds with is a very important decision. I would recommend as much organic material as possible. I started with 12 wheelbarrows of topsoil that I had from a previous project. This was mixed with the builder’s sand on the base and some extra grit for improved drainage.

Next was a wheelbarrow of compost from our compost bin, including hundreds of healthy worms, and millions of soil microbes, which are a gardener’s best friend.

Healthy plants need great soil, and the permaculture saying of “feed the soil, not the plants” is a great principle to go by when deciding how to build a healthy soil. I chose organic manure, an organic chicken pellet fertiliser including seaweed dust and potash as well as an organic multipurpose compost for the final layer for the young plants to be planted into. This layer would be slow to grow any unwanted weeds, as the bagged compost and manure is heat treated, which is why the added soil microbes and worms from the first layer would soon mix with the final layer. At this stage I also put the final finish of sharp gravel on the path (which slugs and snails hate to travel over). There was about 4” of height left on the boards, to add more soil in the coming growing seasons.

The first plants
I was now ready to plant! The first three plants were going to be permanent features in the greenhouse, and these were placed on the eastern wall, so as not to shade the vegetables in the afternoon. I chose the self fertile Grape ‘Vanessa’, which I plan to train into the roof to give some shade for certain crops in later summer as well as lovely grapes. Next were a self fertile Peach and Nectarine to train espalier along the eastern wall. I plan to help pollinate these with the aid of a paintbrush as they flower.
I planted rows of beetroot, marked with a line of vermiculite, which also covered the fine seeds.

In another corner I planted a few sugar snap peas, to be grown up a climbing wigwam I had left over from the previous growing season.

At this stage I also planted out a few lines of Lettuce, Baby and PakChoi, perpetual spinach and Rocket, all started a few weeks earlier in modules. I also planted two rows of onion sets, a few spring garlic and some French shallots.

The future
In the near future, my plan is to plant out Tomatoes, Cucumbers, Coriander, Basil, Peppers and Chillies in the remaining space. All these plants have now been started and are growing on in modules until they are large enough to be planted into the raised beds. As the lettuce goes to seed or is eaten as the weather gets hotter, I will replace where needed.
As you can see, the possibilities are up to your imagination and taste regarding what you decide to use your own greenhouse for. Watch this space for more updates and in the mean time, happy growing!

After 3 weeks we were harvesting our first lettuce!